OGN network was started by Pawel Jalocha in 2012 with the idea of creating an inexpensive ground receiver for FLARM signals, network them and to stream live traffic because doable, fun and useful. The technical approach was brilliant: Instead of creating expensive custom hardware, he took advantage of an inexpensive tunable USB TV receiver (also known as software-defined radio), plugged it into a small Linux computer (also known as Rasberry-Pi and comparable designs), and applied a bit software wizardry to process FLARM signals instead of an episode of “Simpsons”.

Every OGN station receives signals from FLARM and later also other conspicuity (or how EASA has recently started to name them: iconspicuity) devices. The traffic data is streamed via the Internet to a cloud server, then distributed to a growing number of applications, both on the ground and in the air. These include visualization, flight tracking, flight time logging, search-and-rescue, archiving, accident investigation assistance, airspace design assistance, re-broadcasting for non-interoperable other conspicuity devices and more. Thus the purpose has clearly gone into the safety domain.

OGN quickly grew thanks to its active community, offering attractive additional services for aviation, the basic ones mostly for free, some at cost (especially when related to hardware), some in a commercial context. Today, its nearly 2’000 receivers cover large parts of Europe and many smaller areas in the rest of the world. The majority of data processes and airspace users tracked with OGN even today is FLARM, used by more than 50% of all aircraft and an exploding number of other users in Europe and the rest of the world.

Today, we are pleased to learn that OGN and its current main coordinator, Sebastien Chaumontet, were awarded the EASA GA Safety Award. We fully support this decision and congratulate Seb, Pawel, Philippe Boissel, Wojtek Buczak, Melissa Jenkins Andersson, Gerhard Wesp, Angel Casado (the most active contributors in the past and present) and the whole community of broadcasting airspace users and receiver operators on this achievement.

We did not initially buy into the idea of OGN when Pawel first expressed his early ideas when working for us in 2011, and we voiced strong concerns on several legal and IP aspects around OGN in 2014/2015. In parallel, we also actively contacted the team behind OGN starting in 2014 and offered assistance. Starting in 2015, we improved the radio communication in order to make OGN better, added several features to accommodate the extended needs from pilots being exposed to public tracking via OGN, and ensured OGN’s decoding staying interoperable through all major updates released so far.

Looking forward we wonder: If EASA endorses non-certified, direct-broadcast and non-networked electronic conspicuity technology in manned aviation – why is the same not possible for UAV? Why do we instead mandate complex, distributed, expensive, and fragile systems that can only ever be built multi-billion-dollar companies? 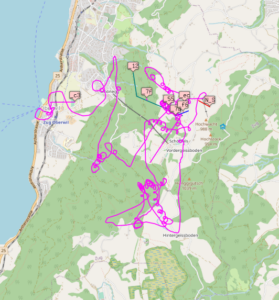