7 world records in one blow!

If Morell, Malik, Marco, Tobi, and Tom were a boy band, „Crazy Visionaries“ would fit as a band name. Because that describes pretty good what the five of them are up to: At the end of August they are going on a hunt for several records with an electric airplane.

Among other things, it should become the lowest energy consumption (kWh/100 km) and the highest average speed of a small aircraft. In total, the pioneers want to set seven new world records on these 700 kilometers.

When Charles Lindbergh successfully crossed the Atlantic in his plane in 1927, he was certainly also attracted by the 25,000-dollar prize money. “Flying Fool” was what the press called him before his flight, as several aviation pioneers had already died before him in the attempt to cross the Atlantic Ocean alone. After he had made it, Lindbergh was a hero.

It will probably not be quite that dramatic with the upcoming trans-Germany flight. On the one hand, the task is not quite as risky and on the other hand, there is no prize money to gain. “Unfortunately,” says Malik Aziz, “because the electric flight from Zurich to Norderney is regrettably not for free. But after all, electric flying is four times more efficient than with fossil fuel,” the graduate designer from Aachen explains. Malik is one of five and responsible for the media in the team. He also looks after the sponsors, which include FLARM.

During the shooting of the video project “The Future of Aviation”, Malik twittered a few pictures from Switzerland. There he and Morell Westermann met Marco Buholzer, who flies the only certified electric training aircraft. The Pipistrel’s Velis Electro has a 60 kW motor and state-of-the-art battery technology. Morell and Malik are electro fans and know each other from the podcast “Cleanelectric”, the largest German-language podcast about electro-mobility. Malik is part of the Cleanelectric podcast team and Morell is a welcome guest there.

Tobi Pape lives as a beer brewer on the North Sea island Norderney and is a long-time listener of the podcast. He has been driving electric cars for 20 years and is also interested in electric planes: “Electric planes would be ideal here for island hopping with short distances.” When he sees the pictures on Twitter, he contacted Morell and Malik straightaway. “I spontaneously had the idea whether it would be possible to take an electric flight from Switzerland to Norderney,” as Tobi remembers.

The idea was born when Tobi and Morell were talking on the phone the same evening. “The electric plane only manages about 100 kilometers in one go. But it’s exactly the same as with the cars, you can recharge them,” explains Morell. He asks Marco if he would like to fly to the North Sea with his Pipistrel. He wanted to. Morell called Malik: “We would need a professional video documentation of an extraordinary flying safari across Germany.” Malik also agreed immediately, his partner Tom Albrecht from the joint video production company “shapes” completed the team. He is also an electromobilist and thought that the project is crazy enough to join it.

The five electro-friends clarified the feasibility and checked the finances, they looked for routes and verified if anyone has ever tried it before. They noticed: “If we make it, we’ll set seven world records at once,” says Morell, “the highest average speed over 700 kilometers as well as the highest altitude ever reached by an electric plane, the lowest energy consumption per kilometer per person, the longest distance flown electrically, etc.”

The aircraft is protected against mid-air collisions by the onboard FLARM collision avoidance system. This also makes it possible to track the world record flight online.

Flying is not necessarily harmful to the climate

Marco explains why the friends are undertaking the electric flying expedition: “Flying with kerosene is extremely harmful to the climate. Aviation currently accounts for around five percent of global warming, and the trend is increasing. The emissions at high altitude are a particular problem that arise from air traffic. We want to show that there are alternatives, even if we don’t manage the whole route in one go, CO₂-neutral flying is already possible today!”

“Most small planes fly distances shorter than 200 kilometers anyway, you could do that electrically,” Tobi points out. “I also wonder why on such a small island all mobility is not electric anyway, but that’s another matter.”

Even though the aviation industry is currently not doing well, it has been benefiting from direct and indirect grants for decades. As a result, there is no fair competition between conventional and electric aircraft. According to the German Bundesumweltamt (Federal Environment Agency), flights in Germany are subsidized to an amount of 12 billion euros per year, mainly through exemption from VAT on tickets and energy tax on kerosene.

“On August 30th we will prove with our extraordinary flight that the time of electric planes has come”, Marco emphasizes. The landing is scheduled for September 1st. 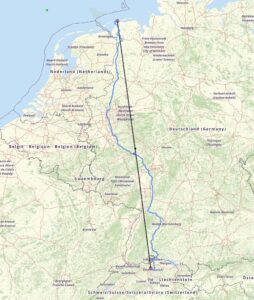 7 world records in one blow: