See-and-avoid is still the gold standard for collision avoidance in aviation, especially in VFR. There is simply no system that can detect all traffic, from airliners to single-engine piston aircraft, paragliders, and UAVs. Looking out is still part of the routine of even airliner pilots – especially while flying through Class E airspace shared with General Aviation (as is shockingly common, for instance, in Germany and Switzerland).

Alas, human vision is notoriously limited and pilots have more than just this one job to focus on. So why not help the humans (and similarly, air traffic control on the ground) by pointing out traffic they may have missed, complementing cooperative systems like transponders/TCAS, ADS-B, and FLARM?

Together with the Computer Vision Laboratory (CVLAB) of the EPFL in Lausanne, we have developed a leading-edge architecture together with a set of algorithms to do exactly that. It detects and classifies other manned aircraft and some other hazards in a live video stream from one onboard camera based on hardware that can fit into a GA cockpit. This information can then be used to track and locate targets, to issue warnings to the pilots and even to automatically recommend and execute avoidance maneuvers. Some algorithms are based on the well-researched YOLO architecture, using tools from deep learning and convolutional neural networks (CNN) to achieve high accuracy while running in real-time. Other algorithms apply common computer vision algorithms.

A crucial part of deep learning methods is to have a large set of sample data that can be fed to the algorithm for training. The data first needs to be annotated by humans, which can be a very tedious task. CVLAB has developed tools to make this efficient and together we have annotated a huge set of video data from many flights conducted under various traffic and environmental conditions.

The first video below is made by EPFL to explain the project, the challenges that they faced and how they were solved. The second video shows a clip from the onboard camera with aircraft identification annotations made by the deep learning algorithms. 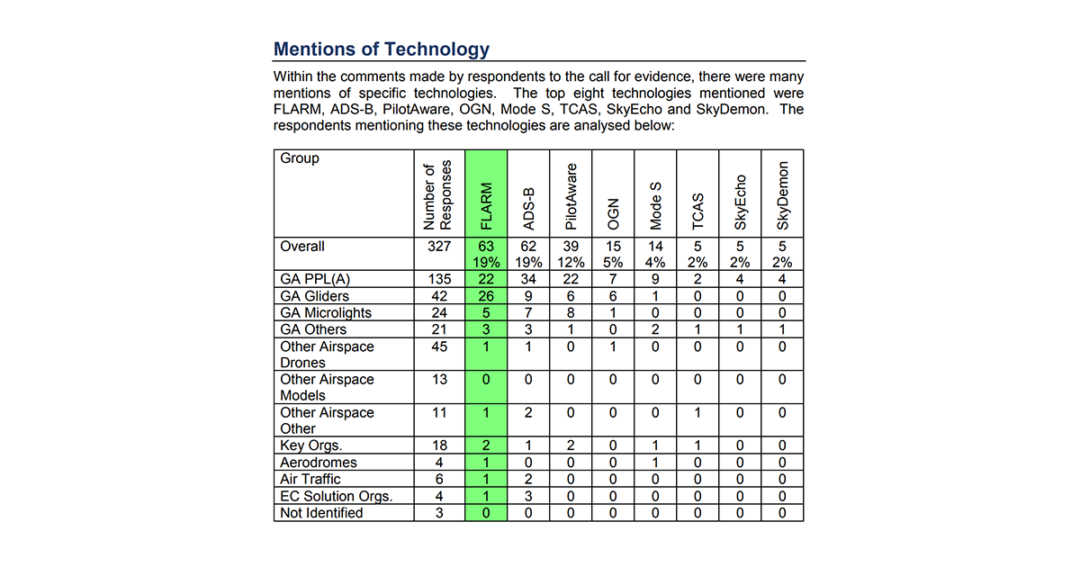 During the spring, the UK CAA ran a Call for Evidence, which FLARM participated in and gave extensive feedback. The results have just been published and FLARM was unsurprisingly the system that was acknowledged by most respondents. FLARM is already well integrated into UK airspace with over 7,000 aircraft flying in the UK being equipped to date. Of these, half are powered airplanes and helicopters.

We will continue working closely with the regulators to ensure that as many aircraft as possible are equipped with FLARM to increase the safety for all diligent and responsible pilots.

The FlarmLED+ display from the company LXNAV has now been certified as FLARM Compatible in the category ‘Primary Display’. Certification in this category makes it possible to install the display as the main display connected to FLARM devices that don’t have their own display.

The FlarmLED+ has bright bi-color LEDs for the collision warnings and a digital distance indicator, which can be configured for km, nm, or statute miles. It also has an innovative capacitive touchpad and very loud internal aural warnings.

The display can be found, together with other certified displays, under the ‘Primary Displays’ category in the Product Selector. 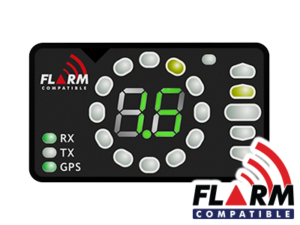 We are working in an InnoSuisse-sponsored research project led by EPFL CVLab on camera-based detection of airplanes. The algorithms automatically detect traffic and draw a red box around another aircraft to indicate that it has been detected. More information to follow!

The Swiss Civil Aviation Authority (FOCA) today has decided FLARM qualifies both as a Supplemental Data Service Providers (SDSP) as well as a future U-Space Service Provider (USP) and thus has accepted our an application to join the Swiss U-Space Implementation group (SUSI).

The U-Space – a European term for Unmanned Traffic Management (UTM) – is a set of services and specific procedures enabling a safe, efficient, sustainable and secure integration of drones into the airspace. These services rely on a high level of digitalisation and automation of functions, which enable complex operations with low human workload. Harmonized standards worldwide are key for a dynamic drone sector, as legal certainty is needed to enable investment. 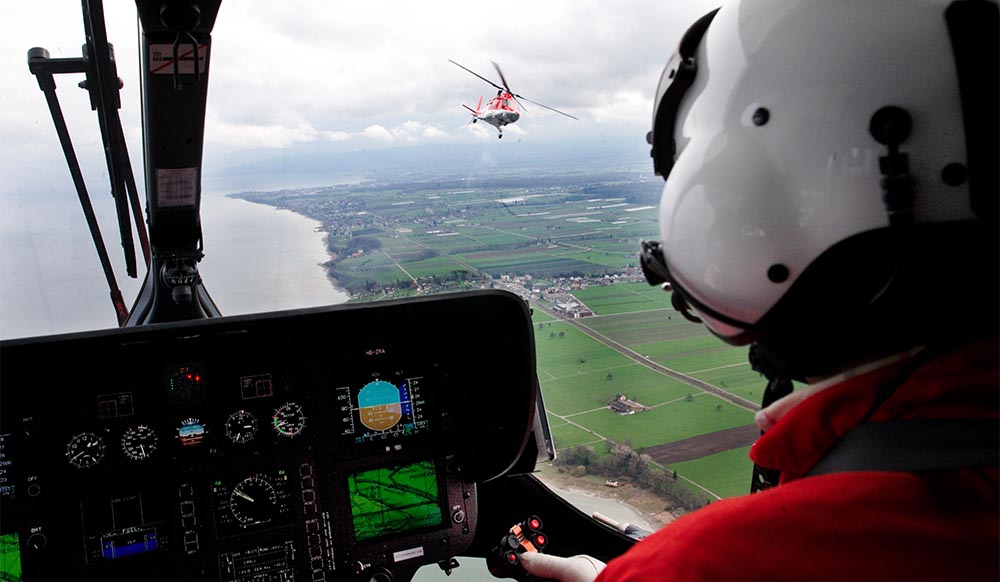 FLARM in action. A V4 LED display (top center of the instrument panel) indicates a collision warning and shows the direction to the intruder.

EASA has formally approved FLARM for fixed installation in helicopters. Being already installed in over 40,000 General Aviation aircraft, helicopter operators previously had to apply for individual installation approvals from EASA or use PowerFLARM Portable. The newly published EASA Certification Memorandum (CM) extends generic FLARM installations from ELA2 aircraft (previously available as a Standard Change or an AML-based Minor Change) to all CS‑23, CS‑27 and CS‑29 aircraft, including all rotorcraft.

“This is a huge advancement for GA safety in Europe”, said Daniel Hoffmann, General Manager at FLARM Technology. “We have seen a massive increase in demand for FLARM from helicopter operators all around Europe in just the last two years. In Switzerland, almost all helicopters already have FLARM since a few years. In Germany and other European countries, many large operators, including the Federal Police, ADAC and DRF, have FLARM installed in their large helicopter fleets”.

The newly published CM will enable both operators and aircraft manufacturers to easily integrate FLARM. It is also one of the first times that EASA has ever applied the ‘Net Safety Benefit’ approach in their certification activities. “EASA has taken the over 100 million flight hours of FLARM into account”, said Hoffmann. “We have estimated that FLARM has saved over 50 lives in the last fifteen years. At the same time, there have been no incidents where FLARM was a causal factor”.

The CM approves FLARM for both VFR and IFR under VMC but does not give credit against ADS-B Out and TCAS requirements (applicable for aircraft above 5,700 kg MTOM).

FLARM systems are available from several different manufacturers for many different aircraft types.

FLARM has been awarded the UK BGA’s Bill Scull Safety Award during AERO 2019. The motivation for the award from the BGA is as follows: 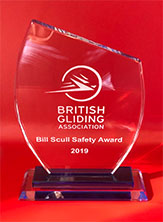 Bill Scull was a very active safety practitioner in gliding. The Bill Scull award is presented annually to a person or organisation for services to gliding safety.

Mid-air collisions have killed 33 UK glider pilots since 1975. Almost all mid-air glider collisions are with another glider, and they mainly happen in the dynamic situations in thermals and around airfields, where other gliders can be hidden from sight behind the glider structure.

In 2004, three Swiss glider pilots applied their engineering expertise to design a system that would alert pilots about an imminent collision and give an indication of the direction in which the threat lay.

Today, most of the active UK glider fleet carries the FLARM system that they invented; we have had no glider-glider collisions since 2014 – the first time that there have been four such years in a row; and there has only ever been one collision between FLARM-equipped gliders.

Having invented the FLARM system and designed the first devices, Urs, Andrea and Urban continued to develop the system to improve its performance, adapt its behaviour for competitions, add functionality to measure antenna performance and find lost gliders and to build in an obstacle database. New versions allowed multiple antennas for better coverage, and detection of powered aircraft equipped with transponders or ADS-B.

FLARM’s complex path prediction algorithms mean that it remains the only collision alerting system that is effective in the close manoeuvring situations such as thermals in which gliders spend so much time.

For devising, manufacturing, sustaining and continuing to develop this exceptional safety system, which has helped prevent collisions and save glider pilots’ lives across Europe, Urs, Andrea and Urban are deserving recipients of the Bill Scull safety award.

Swiss HEMS-operator Rega presented a new type of aircraft for searching for missing persons: the newly developed Rega drone can autonomously scan large search areas and is equipped with various sensors, such as a thermal camera. As a result, in the future, Rega will have at its disposal an additional device to help it search for people in distress if the helicopter has to remain on the ground due to poor visibility.

“We observed the development of drone technology from an early stage and were always convinced that drones could be of help in particular on search missions,” says Head of Helicopter Operations Sascha Hardegger. However, there is currently no drone system on the market that meets all of Rega’s requirements. In particular, it is not possible to operate a relatively small, lightweight and flexible drone over a distance of several kilometers and for several hours without visual contact with the drone pilot. “As a result, we took the initiative and decided to develop a Rega drone ourselves in collaboration with suitable partners”.

With its three rotor blades, a rotor diameter of just over two meters and a 10 kg payload, the new Rega drone looks like a mini helicopter. During a search mission, it scans large search areas precisely and autonomously (16 km2 in 2 hours with 80 km/h). It is able to independently detect and avoid other aircraft or obstacles, such as helicopters and overhead cables. This is possible thanks to anti-collision systems, coupled with countless data stored in the drone’s in-flight computer, such as digital models of the terrain and obstacle databases. The drone operates without visual contact with the pilot (BVLOS), has an endurance of 3 hours and maximal speed of 120 km/h.

With two redundant GNSS receivers, the Rega drone flies autonomously on a predefined route. It follows the topography of the terrain at an altitude of around 80–100 meters above ground level. In addition, a ground radar is built into the drone. Like many aircraft in Switzerland, the drone is equipped with the FLARM anti-collision system. The FLARM signals are evaluated on board. If necessary, the drone will automatically alter its flight path in order to avoid an impending collision.

Thanks to the FLARM anti-collision warning system, the drone is mutually recognizable electronically by other aircraft from a considerable distance. The drone pilot at the ground control station is constantly connected with the so-called U-space. This is an air traffic management system that is currently being set up to coordinate unmanned aircraft in jointly used airspace. It aims to prevent the drone from getting dangerously close to known air traffic.

For the event that, despite all the precautions described above, the Rega drone does get dangerously close to an aircraft and runs the risk of colliding with it, it is equipped with an active, automatic anti-collision function (detect & avoid, DAA). Based on the signals transmitted by the FLARM anti-collision warning system, the drone autonomously alters its flight path in good time to avoid colliding with the other aircraft. Around 80 percent of all aircraft in Switzerland, including all of Rega’s helicopters, are voluntarily equipped with FLARM, and the system is also becoming increasingly popular with paraglider pilots. This collision avoidance function will soon be enhanced with a built-in radar device to avoid non-cooperative traffic. 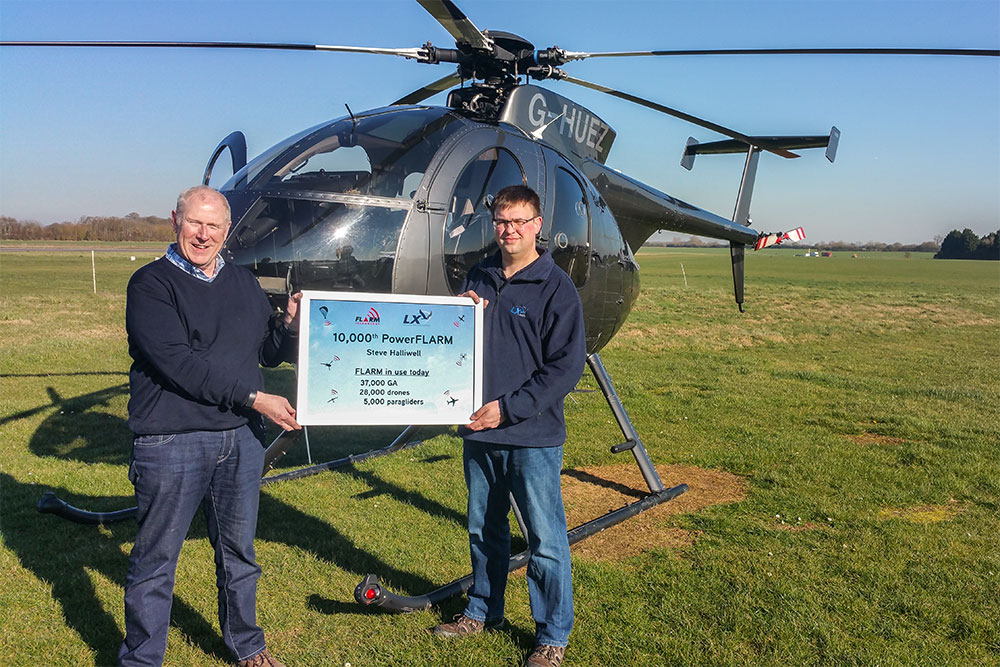 Today, we are proud to announce that we have delivered the 10,000th PowerFLARM system to a UK customer. Since its invention in 2004, nearly 40,000 FLARM systems have been installed in all types of manned airplanes and rotorcraft. PowerFLARM was introduced to cater to the demands of powered airplane and helicopter pilots. With tripled detection range, antenna diversity, better interference protection, ADS-B/transponder receiver and better and intuitive obstacle warnings, PowerFLARM can warn for impending collisions with all aircraft and obstacle types.

The 10,000th PowerFLARM customer was Steve Halliwell from Manchester. He installed the PowerFLARM system in his Hughes MD 500 helicopter to be able to avoid other light aircraft and obstacles. When once flying his helicopter in a mountainous area, he was within 100 ft of colliding with another aircraft head-on. Next time something similar happens, the PowerFLARM will give him a timely collision warning so he can avoid a collision without a scare.